Over 500 young people from all over the world are due to meet at #UNESCO Headquarters in Paris from 26 to 28 October 2015 to ensure that youth remains top of the agenda ahead of #COP21, the UN Climate Change Conference, in the context of the implementation of the new global Sustainable Development Goals. Read more here: http://on.unesco.org/1kzS1Iu #SDGs#YouthForum
Posted by John Daly at 5:48 PM No comments:

#KeepSpeechFree: UNESCO has joined forces with Google to promote freedom of expression in the online sphere, on World Press Freedom Day (3 May). They have developed a set of tools to help you better understand the threats to free expression online today – and what you can do about them:

Urgent action is needed to avoid the planet from facing a 40% shortfall in water supply by 2030. We must dramatically improve the way water is managed globally, in the face of ever-rising demand and the over exploitation of our groundwater reserves.

Email ThisBlogThis!Share to TwitterShare to FacebookShare to Pinterest
Labels: water

Annual Meeting of the U.S. National Commission for UNESCO.

with a break for lunch at 12pm.  The meeting is open to the public so please feel free to share with interested parties. Anyone planning on attending must RSVP’s to dcunesco@state.gov in order to facilitate entry into the building.

U.S. Ambassador Crystal Nix-Hines is scheduled to speak with the Commission and discuss U.S. engagement with UNESCO along with her priorities.

We all are looking forward to the 70th Anniversary of UNESCO and how to best participate as a community. http://en.unesco.org/70years#view-display-id-section4.
Posted by John Daly at 5:09 PM No comments:

Call for Papers and Museum Material

It was suggested that I share this request from the Hungarian National Commission for UNESCO.

Email ThisBlogThis!Share to TwitterShare to FacebookShare to Pinterest
Labels: Culture of Peace, information

Suggestions Relevant to the Status of Scientists.

UNESCO has called for advice and comments regarding the revision of the UNESCO Recommendation on the Status of Scientific Researchers. The original recommendations date from 1974.

I was therefore surprised that I had never heard of this UNESCO Recommendation. When I read it, I could see why. It is not only turgid in style but it deals with all sorts of things other than "the status of scientific researchers". I don't think that the relevant scientific leadership in UNESCO's member states know of the existence of this recommendation, nor that they would know what to do to implement it if they were made aware of it.

As a first suggestion, I would focus the recommendations on the status of "scientists", not just "scientific researchers".

Many scientific activities will be carried out by teams of people, and in general on would expect those teams to be headed by professional scientists -- those with the education, training and experience to fully understand the nature of scientific challenges, methods and work.

A scientist might have legal status in her role as professor or researcher, but probably not in her more general role of "scientist". Thus she might enjoy a legal right to tenure and academic freedom as a professor and have legal responsibilities for the ethical conduct of research as a researcher.

So what is the state or condition of the scientist with respect to circumstances? In some circumstances a scientist serves as:
What then is the appropriate role for UNESCO in making recommendations on the status of scientists. I suspect that there are few such recommendations. Perhaps the recommendations should focus on governmental and educational institutions, as these are more likely to attend to UNESCO's suggestions.


I suppose that there are some legal implications of these aspects of a scientists status. Thus a scientist might need to have greater access to the Internet and to the importation of foreign literature than would be granted to the general public in some countries. So too, academic scientists (at least in some fields) might perhaps appropriately be granted more time for public service than would faculty in say the humanities.

Scientific ethics require scientists working for government to share their scientific findings with the public, and governments should recognize this fact. While politicians and bureaucrats may regularly have limitations placed on their public statements by their governments, here is special status may well be appropriate for scientists.

I would guess that UNESCO's focus should be on helping small, poor countries to use their relatively few scientists well. In part that means encouraging institutions to emphasize critically important scientific fields in their policies.
In general, I would  suggest UNESCO deviate from its usual policy to produce a short, easily read and understood set of recommendations. If they are to be useful, they might be targeted to a subset of UNESCO member states, and efforts made to provide them to the relevant science policy makers in the governments of those states utilizing UNESCO's country regional missions as well as national commissions.
Posted by John Daly at 12:27 PM 1 comment:

Email ThisBlogThis!Share to TwitterShare to FacebookShare to Pinterest
Labels: science 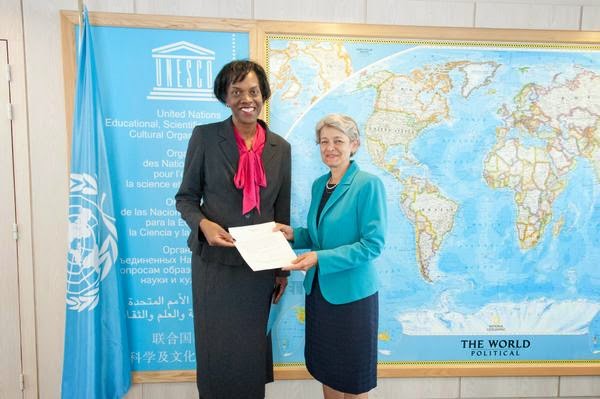 Email ThisBlogThis!Share to TwitterShare to FacebookShare to Pinterest
Labels: US Mission to UNESCO

A message for UNESCO